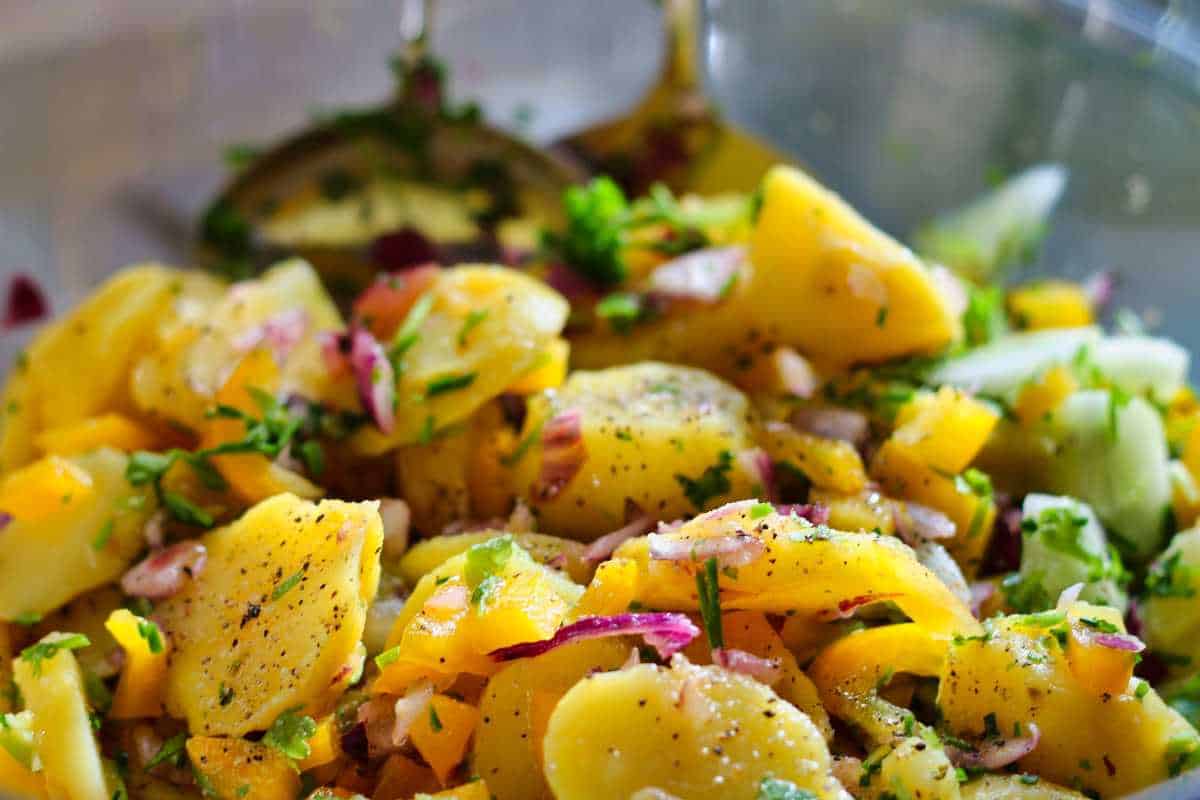 There’s nothing better than balancing our halal Nashville hot chicken with a side of our delicious Crimson Coward potato salad. A classic side dish often found at BBQs, picnics, or really any summer or spring get together. Potato salad has found its own place in the hearts of people around the world.

It adds a twist to one of the world’s favorite vegetables. Hello mashed potatoes, latkes, baked potatoes, hash browns, stuffed potatoes, French fries, potato skins and potato chips, need we say more? Crimson Coward Potato Salad is the perfect mix of creamy, comforting and tangy. Here at Crimson Coward, we even take it up a notch with a nice dash of cayenne pepper to bring in a kick.

Would you still consider that a potato salad or would it be more of a side dish? Martha Stewart features a traditional German potato salad recipe which includes the unusual ingredient of beef broth which she says is a must. Have you ever heard of adding beef broth to potato salad before?

In Russia the dish is called Russian Potato Salad or Olivier Salad. The name is a nod to the Belgian chef Lucien Olivier who created the dish in the late 1860’s. Olivier Salad can be described as hearty which makes sense considering the winters in Russia. Some of the other ingredients include carrots, dill, sweet pickles, hard-boiled eggs, peas and English cucumber. Have you ever had cucumbers in your potato salad?

Our Crimson Coward Potato Salad is more of the American-style potato salad. Which is classically served cold and typically made with potatoes, mayonnaise, vegetables, herbs and spices. More health-conscious recipes would suggest a mayonnaise substitute such as yogurt. But the richness and flavor won’t be quite the same. There are also recipes that use non-dairy mayonnaise, so vegans don’t get left out of the potato salad love.

Other recipes get really indulgent calling for both sour cream and mayonnaise, even chopped hard boiled eggs, meat and/or bacon. In other variations, such as in French recipes, potato salad is said to be made by boiling potatoes with wine and dressed with vinegar, salt, onions, bacon, and oil.

Many would argue that the best potato salad is the one that is made in the most authentic way, but truly, it’s all about personal preference and it all starts with the potatoes. Did you know that there are over 4,000 varieties of potatoes in Peru alone? Now, could you imagine how many variations of potato salad we could make? Do you prefer classic American style potato salad or one with more international flair?

When it comes to potatoes, you can’t go wrong with any type of potato. Still, there are still some that make the dish better than others. Overall, there are three types of potatoes: waxy, in-between, and starchy. If you’re debating between the three on a trip to the grocery store, waxy potatoes are your best bet. As they are thin-skinned, they have the least amount of starch and are able to retain their shape when boiled which makes them perfect for a potato salad.

She notes that the commonly available Russet, Idaho and red potatoes are your starchy potatoes, thank you Martha. Ask your local produce department or farmers market for their best potato suggestions depending on where you live and the season.

In-between potatoes are also a solid choice. Though they have more starch than waxy potatoes, they will still work in a potato salad. Lastly, if you like a mushier texture, starchy potatoes is what you need. Do you have any potato salad recipe secrets up your sleeve? Order our Crimson Coward Potato Salad next to the tasty Nashville hot chicken to satisfy your taste.

Also, if you are interested in other veggies and delicious side dishes, then we recommend you to read about greens and veggies in Southern food with interesting facts about other types of tasty greens and salads.

We are open for dine-in, take out and delivery seven days a week.

BACK TO BLOG POSTS

VIEW ALL REVIEWS
I've been to many hot chicken places, and you should choose Crimson Coward for their sauces. The usual fare is great... chicken is juicy, bread and pickles soaks it up, fries are just fine.

Alex F.
So good. The highest heat level is legitimately hot and I tolerate high levels of heat. Staff are nice and sandwiches are bomb. It's so big I usually not able to finish it. It is definitely a top contender in the so cal hot chicken business.

Sarah L.
The burger was pretty good. It had a crunch to it and it was well marinated. I would recommend this place if you havn't gave it a shot.

Carlos M.
Best hot chicken in the area! Had the 3 piece (medium heat) it was hot but still enjoyable! Fries Mac & cheese

Jerry O.
This place is delicious. Thank you to all the crew there for making this first time great! S/O to Big A for the recommendations and fast service

“20 of the best fried chicken restaurants places in America.”

Locally honored by
the Press-Telegram and LAStartups!